Yves Lambert, Arnaud's father, founded the Domaine de Saint-Just in 1996 at the age of 47 when he decided to change his life and return to his origins in the "Terres de Saumur". Its ambition, from the beginning, is to let the individual terroirs of Saint-Cyr-en-Bourg express itself in the heart of the Saumur Champigny appellation, for both grape varieties: Cabernet Franc and Chenin. In 2005 Arnaud reaches his father pursuing the same objectives. In 2009 the conversion to the organic cultivation of the vineyard began and also the “fermage” of the 8 different Clos cultivated until then by the Château de Brézé. After 8 years of separate management of the two Domaines, Arnaud decides to take a step forward and to mainly promote the vineyards of its municipalities. Hence the decision to merge the Domaine de Saint-Just, the initial name decided by the father, and the Château de Brézé under one name: Domaine Arnaud Lambert. His motto is "to progress means to leverage one's past, not be a prisoner of it and develop a sensitivity for the future". Arnaud considers that the winemaker is important for the expression of Terroir and in fact his wines, produced in the municipalities of Saint-Cyren-Bourg and Brézé vinified respecting the individual terroirs, have great peculiarities and fully represent the wine Loire. 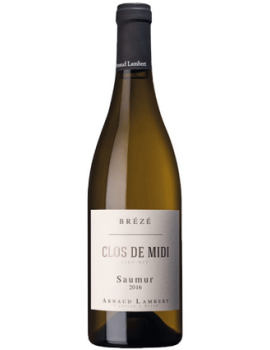